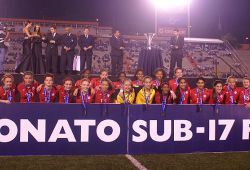 May 12, 2012 – (Re-printed from canadasoccer.com) Canada won a silver medal at the 2012 CONCACAF Women’s Under-17 Championship in Ciudad de Guatemala. The Canadians dominated possession and territory for most of the championship final, played on 12 May at the Estadio Cementos Progreso. An unfortunate mistake midway through the first half, however, was the only blemish in an 0:1 loss to CONCACAF winners USA.

Canada posted four wins and one loss in five matches at the 2012 CONCACAF Women’s Under-17 Championship. The team scored 17 goals and conceded just two, including the winner by Amber Munerlyn. Canada’s leading scorers in the tournament were Summer Clarke (six) and Valérie Sanderson (five), while USA Summer Green was the tournament leader with 12 goals (albeit she was held off the scoresheet against Canada).

Clarke, Sanderson (twice), Kadeisha Buchanan and captain Ashley Lawrence won Player of the Match honours during the tournament. Goalkeeper Kailen Sheridan posted three clean sheets, including a 1:0 victory over Mexico in the semi-final stage to qualify Canada for the FIFA U-17 Women’s World Cup Azerbaijan 2012.

Since 2002, Canada has qualified for eight of nine FIFA women’s youth tournaments, a feat matched by only four other countries in the world (Brazil, Germany, Nigeria and USA). That record puts Canada inside the top 2.5% amongst all 208 FIFA member associations. Also in the last two years, Canada has qualified for five of seven FIFA tournaments (matched by only six other countries in the world).

The FIFA U-17 Women’s World Cup Azerbaijan 2012 runs 22 September to 13 October. USA, Canada and Mexico have all qualified through the CONCACAF Women’s Under-17 Championship. Along with the three CONCACAF teams, the 16-team tournament will qualify three teams from Asia (China PR, Japan and Korea DPR), three teams from Africa (Gambia, Ghana and Nigeria), one team from Oceania (New Zealand), three teams from South America (Brazil, Colombia and Uruguay), host Azerbaijan and two more teams from Europe (to be determined in late June).