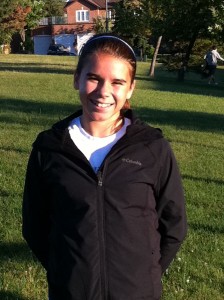 The 22nd – and FIRST EVER FEMALE – Member of the Soccer Fitness 20 MPH Club, Megan successfully performed two separate, 4-second running bouts at a speed of exactly 20 miles per hour, on Saturday, July 9, 2011.  On September 14, 2011, Megan improved her top running speed to an impressive 20.5 miles per hour.  Megan has continued to improve, until, most recently, she became the new FASTEST FEMALE AT THE SOCCER FITNESS TRAINING CENTRE with a top speed of 24.5 MPH on Saturday, February 18, 2012!  The first ever female to run 20 miles per hour at the Soccer Fitness Training Centre, Megan has been training with Soccer Fitness since January of 2011, and her training has had both an immediate and long-lasting impact on her performance this season.  A defender with the Woodbridge Strikers 1998 Girls CGSL team, competing for a promotion to the OYSL League, Megan’s speed and endurance have helped her team stay ahead of the competition and at the top of their league this season.  We at Soccer Fitness are extremely proud of Megan, and are looking forward to continuing to work with her throughout her soccer career.