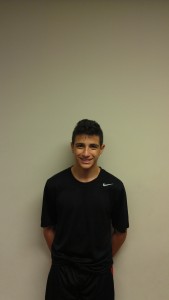 The 119th Member of the Soccer Fitness 20 MPH Club, Nicholas successfully completed 2 separate, 4-second running bouts, at a top speed of exactly 20 miles per hour, on Friday, February 1, 2013.  Presently playing as a midfielder with the Dixie Soccer Club 1997 Boys OYSL team, one of the best teams in the province, Nicholas has been training with Soccer Fitness since October of last year.  He has seen his speed and high intensity running ability improve steadily during that time, and is interested in obtaining a soccer scholarship in the next few years.  We at Soccer Fitness would like to congratulate Nicholas on his accomplishment, and are looking forward to helping him reach his soccer goals.