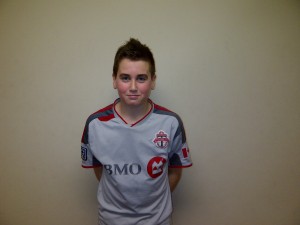 The 112th Member of the Soccer Fitness 20 MPH Club, Noah successfully completed 2 separate, 4-second running bouts, at a top speed of exactly 20 miles per hour, on Tuesday, January 8th, 2013.  A goalkeeper playing for the Brampton Blast 1999 Boys OYSL team, and former member of the Toronto FC Academy, Noah has been training with Soccer Fitness’ Goalkeeper-Specific Protocols for the past 6 months.  His team has been Ontario Cup champions (2012) and runner-up (2011).  He has ambitions of obtaining a university soccer scholarship, and possibly playing professional soccer, in the years to come.  We at Soccer Fitness would like to congratulate Noah on his accomplishments, and are looking forward to continuing to work with him throughout his soccer career.