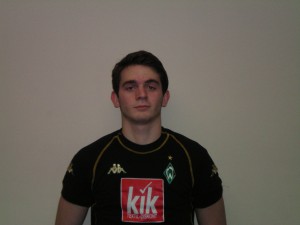 The first – and fastest –  Member of the Soccer Fitness 20 MPH Club, Quinn successfully performed a 4-second run at an impressive 24.5 miles per hour on Saturday, May 7, 2011.  On Friday, May 20, 2011, less than 2 weeks later, Quinn increased his top running speed to an even more impressive 25.5 miles per hour.  Another 3 weeks later, Quinn reached yet another new top speed of 27 miles per hour.  Finally, on August 10, 2011, Quinn equaled the new record for fastest ever running speed at the Soccer Fitness Training Center with an amazing top speed of 30 miles per hour!  A member of the Oakville Soccer Club OSL Under-21 Provincial Men’s team, Quinn has been accepted to attend the University of Guelph, and intends to play for their Varsity Men’s Soccer Team.  Having trained with Soccer Fitness since January of 2011, we expect Quinn to have an immediate impact on the team this fall.  We at Soccer Fitness would like to congratulate Quinn on his recent achievements, and wish him the best of luck in his future athletic endeavors!