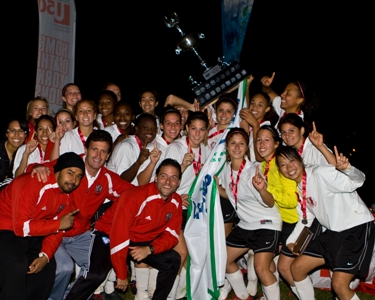 The York University Lions women’s soccer team is this year’s OUA gold medal champion, after dropping the Queen’s Gaels in a thrilling penalty kick finale to what became a goalkeeping showcase on Sunday, November 8, 2009, at the York Stadium.

The Gaels picked up silver medals for their effort. Both teams will go on to the CIS national championships next week (Nov. 12-15).

It was the second shootout finish of the Final Four’s last day, as the Ottawa Gee-Gees captured the bronze earlier in the day against Wilfrid Laurier.

York all-star goalkeeper Sarah Fiorini (Newmarket, Ont.) was stellar in shutting out the Gaels and stopping two of four penalty kicks. Not to be outshone, Elena Corry (Hamilton, Ont.) of Queen’s was equally spectacular at the other end, but the Lions’ shooters proved too slick as they fired home all four shots taken in the penalty kick session.

Both teams traded chances all afternoon, but Fiorini and Corry were the stars of the game. Fiorini plucked corner kicks out of the air with ease, while Corry dove on rebounds and brought the Lions to the edge.

Otaki had some of the best chances to put the Lions ahead, but the ball often went too high and the game remained knotted until the very end.

The game got rougher as it wore on.

Corry collided with a York player early in the second overtime, but she would shake it off to stay strong in net.

Gauthier banged heads with the Gaels’ Victoria Gonzalez-Milroy (Vancouver, B.C.) in the middle of the second frame. Gauthier appeared to be seeing stars for the next few minutes, but Gonzalez-Milroy got the worst of the collision. She had to be substituted out.

Rybicki took a dangerous head shot at Otaki in an attempt to get the star York player off her game late in the overtime. Rybicki leapt behind Otaki with an incoming pass high in the air and put an arm into the back of Otaki’s head. There was no card on the play.

Fiorini made a few critical stops late in regulation. Queen’s went looking to end things in the last few minutes, but Fiorini simply would not allow it as she willed her team into overtime.

Alicia Brown (Brampton, Ont.) made a clutch tackle in the penalty box to stop what seemed the be a sure goal in the 57th minute.

The Lions came into the game off a 1-0 win over the Ottawa Gee-Gees, while the Gaels advanced after defeating the Wilfrid Laurier Golden Hawks 3-2 in extra time on Saturday.