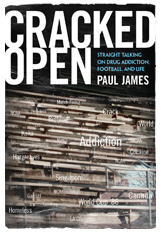 Hall of Fame player, World Cup veteran, former NCAA, CIS, club and Canadian under-20 coach, and present TV analyst, Paul James, has recently published an E-Book, called “Cracked Open”, which chronicles his life and career, yet also sheds light on his battle with drug addiction.  James hopes his harrowing past might help shed light on addiction — and ultimately help others see warning signs and seek/provide help.  Richard Bucciarelli, President of Soccer Fitness Inc., has worked with Paul as both a player for the York Lions Men’s Varsity Soccer Team (2003-2004) and as an Assistant Coach with the Lions Women’s Varsity Team (2008-2009).   “I have known Paul for almost 10 years, and have nothing but respect and admiration for him as a coach, and as a person”, commented Richard.  “The news of his addiction came as a big surprise to me.  I hope that, since Paul has had the courage to come forward and share his story, others in a similar situation in the soccer / coaching communities will now feel empowered top do the same.”  Soccer Fitness Inc. would like to urge any and all who are interested to visit: