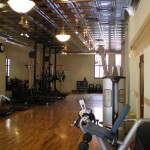 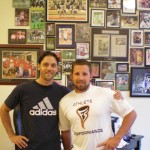 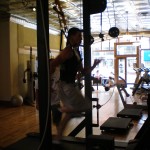 On August 11, 12, and 13, 2010, Richard Bucciarelli, President of Soccer Fitness Inc., visited and toured the Rocky Mountain Performance Centre in Trinidad, Colorado.  Rocky Mountain Performance is a state-of-the-art, sport-specific training facility, located in a small town about 300 miles south of Denver, Colorado.  Beau Chavez, BA, ATC, who owns the facility, has developed a sport-specific strength and conditioning program utilizing the Noramco HS Elite high speed running treadmill, a unique piece of equipment that can do things no other treadmill on the planet can do.  His training methods will be of interest to any coach and / or fitness trainer working with youth soccer players.

“My trip to Colorado to meet Beau and see his training centre was very educational and valuable to me” commented Richard.   “I am excited to have the opportunity to use what I have learned on this trip to further the advancement of the athletes I am working with.  I hope to maintain a strong working relationship with Rocky Mountain Performance and the Noramco Fitness Company in the future”.

The training at Rocky Mountain Performance is all centered around taking advantage of the body’s natural stretch reflexes within its muscles, to produce a maximum amount of force in a minimum amount of time.   The basic principle of the stretch reflex is that when a muscle or group of muscles is rapidly stretched, they will respond with a forceful near-maximal contraction.  This is actually a protective mechanism that our bodies have developed over time to prevent muscle pulls and tears; however, when used properly as a training tool, this protective mechanism can unleash all of the body’s power in a split second.

A common example of the stretch reflex that occurs in human muscle is the typical “knee-jerk” reflex performed by physicians at medical check-ups.  The patella tendon (insertion of the quadriceps muscle, which extends the knee) is tapped with a small mallet.  This tap causes a quick stretch of the tendon – and thus the quadriceps muscle – which in turn causes the response of quickly contracting the tendon and muscle, extending the leg by straightening the knee.  In Soccer, this type of explosive movement occurs frequently in various different movements.  Some examples are accelerating, changing speed, or changing direction when running, as well as shooting.  All of these movements involve a quick stretch of a particular group of muscles, followed by a powerful contraction of those same muscles.

Beau’s treadmill protocols were designed specifically to aid athletes in any sport in the following two areas of performance:

Utilizing the Noramco HS Elite treadmill, Beau is able to accomplish these goals through a unique combination of harnessed level running and incline sprints, as well as his unique and revolutionary 360-degree treadmill runs.

The primary goal of treadmill training is to force athletes to adopt a coordination strategy that allows them to maximize propulsive forces and minimize braking forces.  Incline running, whether on a treadmill (graded) or on the ground (up a hill), is an optimal way to achieve these two goals.  During uphill running at high speed, the powerful extensor muscles in the lower extremity must produce a greater amount of force per stride to push the body upwards, maximizing propulsive forces.  Stride length is increased, and proper sprint biomechanics, including a greater degree of hip flexion and more powerful hip extension, must be maintained in order to get “up the hill”.  Furthermore, braking forces in the lower extremity must be significantly reduced, in order to counteract the effect of gravity and ensure balance and stability while travelling forwards and upwards.

There is simply no better way for athletes to achieve the combination of maximal propulsive forces and minimal braking forces than incline running at high speed.  The key to achieving these benefits, however, is that the incline running must be done at a high velocity.  If the propulsive forces from extension movements in the lower extremity are carried out at lower velocities, the net resulting force will not be great enough for the athlete to “get up the hill” in a quick and efficient manner.  It is in the achievement and maintenance of high velocity, and thereby more powerful propulsive forces, during incline running, where treadmill training holds the greatest advantage over ground-based running.

When running up a hill on the ground, the athlete must make a conscious effort to increase their speed, and furthermore must maintain a high speed regardless of fatigue.  In a high intensity, repeated sprint workout, achieving and maintaining high speed with incline runs can become difficult and impossible.  During incline running on the treadmill, however, athletes must achieve and maintain a high running speed, as set out by the protocol, during the entire duration of the sprint.  Furthermore, the use of a trainer and/or a harness to spot the athlete during the run ensures that the athlete will be pushed just beyond their threshold for maintaining a particular speed and grade, leading to increased improvements in strength, speed, and anaerobic endurance.

The second goal of Beau’s treadmill program is to help athletes develop dynamic strength and stability in the lower back, pelvis, and hip muscles (termed the “lumbo-pelvic-hip complex”).  It is within these crucial structures of the body that the base and foundation for optimal athletic performance is contained.  Furthermore, athletes with weaknesses and/or strength imbalances in this area are considerably more prone to overuse injuries.

Beau’s revolutionary 360-degree harnessed runs are the key to providing the “lumbo-pelvic-hip complex” with a dynamic load, at sport-specific velocities.  The point was made earlier in this article that athletic movements require athletes to produce maximal propulsive forces.  In almost every sport, including soccer, the muscles of the lower extremity, hips and pelvis must continually contract at high speeds, causing the limbs to accelerate quickly, in order for athletes to execute movements efficiently.  The inherent problem in most traditional “core” and lower body strengthening programs is that all movements and exercises are performed at low velocities.  While there are certainly going to be benefits to the athlete in terms of increasing strength and range of motion, the aforementioned high velocity strength/power, which is a requirement of every sport, is neglected with traditional training methods.

During harnessed 360-degree runs on the Noramco treadmill, athletes must run forwards, sideways and backwards, all at a small incline (3-5%) while maintaining a certain running speed.  The movements produced and muscles used in the “lumbo-pelvic-hip complex” during 360-degree runs are as follows:

The main difference between training these muscles on the treadmill, as opposed to using traditional training methods, is that on the treadmill, they are trained at sport-specific velocities.  The limbs are continually forced to accelerate – thus repeating and reinforcing the stretch-reflex pathway in the hip adductors, abductors, extensors and external rotators – in order for the athletes to keep up with the speed of the treadmill.  The net result of the repetitive, high-velocity muscular contractions of the muscles of the “lumbo-pelvic-hip complex” is that the athlete develops dynamic core stability while using the same muscles, movement patterns, and movement speeds that are used in their actual sport.

For more information on Noramco’s HS Elite high speed running treadmill, as well as other cutting-edge fitness training equipment, visit www.noramcofitness.com. Keep logging in to www. soccerfitness.ca  and don’t forget to join our Member’s Area.  Updates, including video demonstrations of the treadmill protocols, are just around the corner!