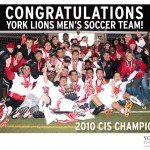 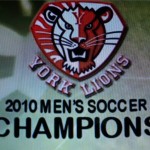 The York University Lions men’s soccer team was crowned national champions for the second time in three years as they defeated the UBC Thunderbirds 1-0 in the gold-medal match of the 2010 CIS championships at Varsity Centre, Sunday night (Nov. 14).

The Lions also won the title two years ago and also in 1977. The team improved its national championship all-time record to 11-4-2 and is now a perfect 3-0 in national final appearances.

“We did what we were expected to do as far as I’m concerned,” said York head coach Carmine Isacco. “We just made a commitment to each other, a commitment to defending and we tried to counter, it didn’t work out as well as we wanted, but we did what we needed to win the game.”

UBC, which holds the CIS record with 11 national titles since 1974, settles for their fourth silver-medal finish in program history.

Third-year York striker Adrian Pena of Woodbridge, Ont., was named the tournament’s most valuable player. The OUA West player of the year and CIS first team all-Canadian was the only Lion to score over the four-day championship and led all players with four goals en route to his second career CIS banner.

Pena scored the lone goal of the game in the 17th minute thanks to a nice give-and-go play from fourth-year defender Dominic Antonini of Winnipeg and first-year forward Alon Badat on the left side of the field. Antonini sent a perfectly-placed cross to Pena who slid the ball past UBC goalkeeper Zach Kalthoff of Calgary.

“It was an amazing build up on the left-wing for sure, but I know that Dominic broke through and I just had to get on the inside of my man, and luckily I did, so it was an easy finish,” said Pena on his game-winning goal. “I feel amazing, we worked for this all season.”

The Lions carried their 1-0 lead into the second half, where they played a sound defensive game.  UBC had trouble penetrating the middle, which was clogged with a sea of York jerseys.

The Thunderbirds rallied toward the end of the game and had back-to-back corner opportunities in both the 73rd and 80th minutes, but Lions goalkeeper Sotiri Varlokostas of Toronto was there to deny anything that came his way.

T-Birds defender Paul Clerc of Coquitlam, B.C., got his head on a Brandon Bonifacio corner kick that sailed just over the net, and Ashley Ankiewicz had a great chance in injury time, but Varlokostas made an excellent diving save to preserve the victory.

“It’s a great group of players. I’m proud to be associated with them,” said UBC head coach Mike Mosher. “They worked their butts off today, through this tournament and through this season. It’s bitterly disappointing but we can say we went down doing everything we possible could have. On the day, we lost to a good team and we have to give our respect to York.”

The Lions got into the final with a thrilling 3-2 victory in penalty kicks over the defending champion Laval Rouge et Or in the quarter-finals, and a nail-biting 1-0 win over the eventual bronze-medal winning Saint Mary’s Huskies in the semis.